Today I was lucky enough to visit the Houses of Parliament and take part in a roundtable discussion as part of the Speaker’s Commission on Digital Democracy. The commission is looking at all aspects of how democracy can be enhanced in the digital age, and will be reporting early next year. 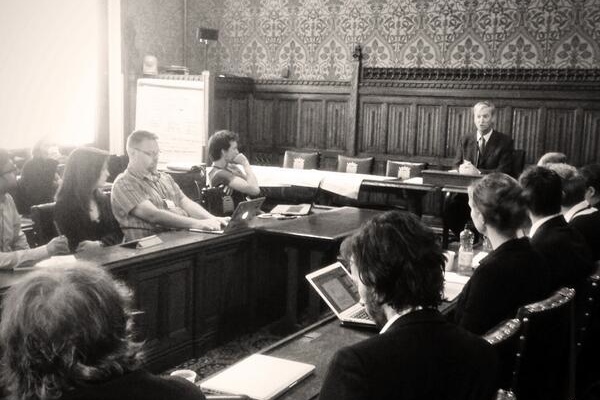 Today’s session was timed to coincide with London Technology Week, and was specifically aimed at getting ideas from technology experts with an interest in the area. Together, we discussed how technology could increase citizen engagement, how parliamentary data could be opened up, and how technology can facilitate more interaction between citizens and Parliament.

A few common themes rapidly emerged, around trust, communication, dialogue, and making citizens feel that they can be heard by the legislature. One good quote was “politics in the everyday, not just once every five years”, which I think encapsulates a lot of what we were trying to get across.

I managed to get in some ideas of agile methodologies, like taking an iterative approach, being focused on user needs, and of embracing failure as an inherent part of the process. There was also the idea put across that democracy itself is never finished (much like software), and that we need to engage in a process of continuous improvement to do it right.

The most important point we made though, in my view, was that digital democracy isn’t a technology problem - that bit’s “easy”. Technology is just the enabler of a much more important cultural shift, and it’s that cultural change that will be hardest to achieve. Opening up democracy means that legislators need to trust the public with information, need to be willing to engage in dialogue with them, and need to lose the fear of negative consequences.

These are all inherent aspects of the Open revolution, and will be the real stumbling blocks for institutions as venerable as the British Parliament, where tradition and immutability are quite literally embedded in the architecture.

However, I have high hopes for the outcome of this commission, based on what I’ve seen today. To keep up with what the commission is doing, you can follow them on Twitter; also, you should totally submit something to one of their calls for evidence.