Can open data help you understand how big your target is? What is the “size of the prize”? For example, we at the ODI may want to know the people who are exposed to open data. A commercial business may look at the total number of potential customers.

Our motto is “knowledge for everyone” and the biggest number of humans is the world’s population.

Extrapolated with a 1.2% growth rate according to World Bank estimates.

The world is complex and we could go on looking at subpopulations like “access to electricity” (only 77.6% in 2010). However, to keep things simple, we will focus on the UK.

Population estimates for the UK

How can we break this down further? We could, for example, look at technical professions. Someone who works with data is hopefully more likely to know about open data.

What about future data people? We can look at statistics for students and subjects they choose. In a general sweep, below all science students are pooled. From this number and past time series we may also be able to calculate predictions and other estimates such as the number of potential ‘data scientists’.

Lastly, do we have a number of people we already reached? Our figures from October 2013 show that the ODI’s passive and active reach derived from online visitors, people who attended our lunchtime lecture, training courses and more. 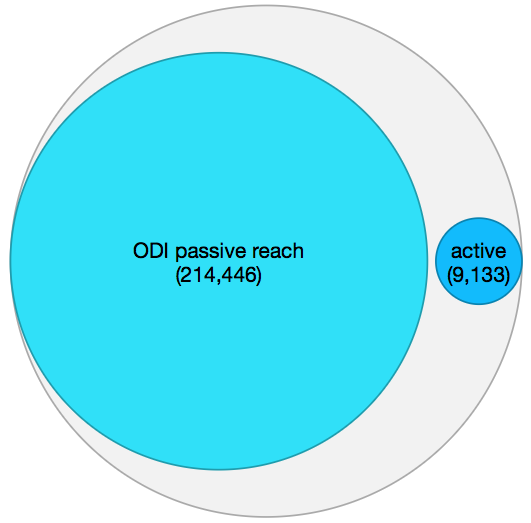 Where is the open data?

The data sources we used here are the World Bank, the Office for National Statistics, the UK datastore and the Higher Education Statistics Agency. Other sources may include Google and Google trends (though not open), DataMarket, and Quandl.

The interactive charts were created with Datawrapper.